Even before I cooked up this crazy plan to visit every arena in the NHL, I’ve dreamed of attending a game in Detroit. I have nothing but admiration for the Red Wings organisation, who for the last 25 years have build a winning culture and established the closest thing to a dynasty we’ve had since the 80’s Oilers. And with all the new buildings popping up across the league, the Joe Louis Arena is one of the last old school arenas left (along with Madison Square Garden in New-York, Nassau Coliseum in Long Island and Rexall Place in Edmonton)

We bought our tickets way back in August, when they went on sale, expecting a late season game to have some importance. And it did. The Wings are fighting for a playoff spot, being in a 4 way tie for the last wildcard spot, and a victory in this game would have pushed back the hopes of the hated Maple a Leafs. The game was less crucial for the Habs, but they’re in a race to the finish with the Tampa Bay Lightning for home ice advantage, so those 2 points mattered too. Unfortunately the Wings were playing without Pavel Datsyuk and Henrik Zetterberg, their two biggest stars who are sidelined by injuries, most likely for the rest of the season.

We flew into Detroit the morning of the game and took a cab to our hotel, that was located by the river, a couple of blocks from the Joe Louis Arena. We’d of course heard horror stories about how Detroit was largely abandoned, and we saw some of that on our way over. A large numbers of suburban homes are either abandoned or in an advanced state of disrepair. The closer we got to downtown,the better it seemed, but clearly this is a city that has fallen on hard times. Even newer constructions are no frills affairs. We dropped our bags at the room and set out to walk around and explore the riverfront area. I had a few landmarks in mind and set out to find them. First up was Joe Louis’s fist statue, a monument to the famous boxer. (A more traditional tribute is also found inside the Cobo Center) Right across the street from it is the Spirit of Detroit statue, in front of the Seal of the state of Michigan. We kept walking around downtown, but it was surprisingly deserted. Google maps indicated that there was a Michigan Sport Hall of Fame nearby and we headed out to find it. It was supposed to be part of Cobo Center but no one at their own info booth knew about it. (As a side note, the tourist maps handed out at the airport and hotels are quite out of date, with many listed attractions that have gone out of business. Obviously even Google has trouble keeping up with Detroit’s downfall.)

The Spirit of Detroit 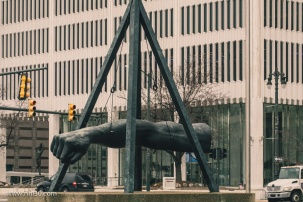 This tribute to union workers is in a bad shape.

Here’s my theory: Detroit went bankrupt after spending all its money into building a Stargate that didn’t work. Think about it…

The Renaissance Center is home to General Motors headquarters. Probably the nicest place we saw in Detroit. 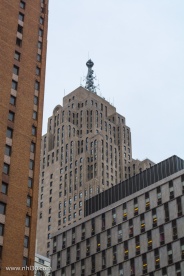 Lots of nice buildings in Detroit. The city must have been magnificent in its heyday.

Cobo Center. This part used to be Cobo Arena until it was renovated to become an extension to the Convention center. 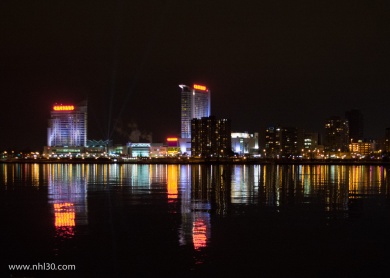 Across the river lies Windsor, ON. 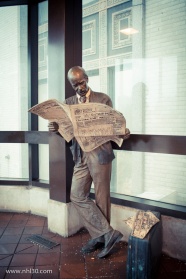 At the Grand Circus Park of the People Mover, this statue had us fooled for a few seconds. We thought the man was real from a distance!

We used the opportunity to scout out The Joe and take pictures during daylight. The arena stands at 19 Steve Yzerman Drive, and seems to be entirely built at ground level, so you need to climb long stairs to get to the doors, which are garishly adorned with pictures of the current roster, and banners recalling the Stanley Cups won at the arena. It’s a non descript, beat up building that doesn’t hint at all the history that’s contained inside. 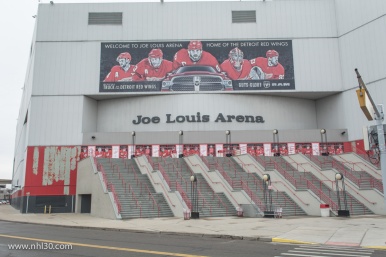 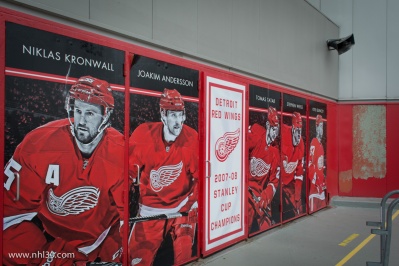 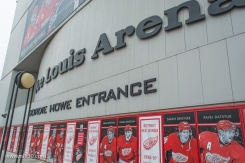 But he does have his own entrance.

It’s also at the edge of downtown, boxed in by the river and the freeway, and there weren’t any obvious eating spots around. Security guards pointed us to the Signature Grille, a nearby sport restaurant. As it turned out, the instructions were a little confusing, so we asked people coming from Detroit’s downtown elevated train, the People Mover. Unfortunately all of them were from out of town and were as confused as us! We met a man and his son, who had come over from Ontario. They were Leafs fans, but came to root for the Habs because a Wings loss would benefit them. Strange but true!

Once we made it there, we almost couldn’t get a table because we didn’t have a reservation, but the hostess found us a place. I was glad I hadn’t donned my Habs jersey yet; the staff was all wearing Red Wings swag, and I somehow doubt they’d have been as accommodating if had been perceived as “the enemy”. 🙂

We got to the arena not too long after the doors were opened. The Joe Louis Arena is an old arena, dating back to 1979 (It replaced the Olympia), but it somehow feels older. It lacks most state of the art features we see in modern arenas, restrooms are somewhat primitive (check out the trough-style urinals!) and the scoreboard is antiquated. But make no mistake: the Joe has soul. It has seen history, passion and triumph. I’ve never been to its predecessor, but it feels like the historic games of the 50’s when Gordie Howe faced Habs’s Maurice “Rocket” Richard live on in the building’s walls. Funding has been approved for a new arena, and I wonder if they’ll be able to bring along all that rich history. The Bell Centre surely never managed to bring the spirit of the Old Forum with it, nor its fabled ghosts.

Convergence at its best! Little Caesars belongs to Mike Ilitch, owner of the Red Wings

The official beer of the Detroit Red Wings.

Gordie Howe with the Hart Trophy. This is the post-1960 version, so this must date to the end of the 62-63 season.

As you enter through the Gordie Howe entrance, 3 bronze statues welcome you. The statues represent Red Wings legends Howe, Ted Lindsay and Alex Delvecchio. The artist chose to represent them as if their movements had been too quick to be captured in metal, resulting in a strange motion trail that oddly seems to work better the longer you look at them. All three played well before my time, but I did manage to see Gordie Howe play once. When I was very young, my mom, who had told me the tales of his prowess on the ice, took me to see him play in the World Hockey Association against the Nordiques at the Colisée in Quebec City. While I don’t really recall the game (although I remember where we sat), I know he was playing on a line with his two sons! (Gordie played professionally from 1946 to 1980! In his last pro season, at the age of 51, he managed to score 15 goals for the Hartford Whalers.) He also held many offensive records (until Gretzky beat them) even though he played his best years in a low scoring era. His robust style of play led to term Gordie Howe Hat Trick, which can be earned by getting a goal, an assist and a fight in the same game (some say it needs to be earned in a single period).

Access to the stands is almost entirely done through the main corridor. It feels small and intimate, but it apparently seats close to 21,000. Honestly, I would have thought a few thousand less. I would guess that there’s not a bad seat in the house, even in the tiny balcony where the few corporate boxes are located. The scoreboard is still analog, with LED lettering, and the shot counter can’t even be personalized for the visiting team (it just says Guest). They don’t have removable ads on the boards, or dynamic ads. But don’t think this is a bad thing: walking into the Joe Louis Arena, I felt transported back in time, to a time when hockey wasn’t about multi-million dollar contracts, wasn’t about maximizing revenue streams (although you can see they squeezed in extra seats at the expense of corridor space at some point) and wasn’t about convergence (but Wings owner Mike Ilitch finds multiple ways to plug in the product of one of his other major holdings, Little Ceasar pizzas. Including throwing boxes in the stands during a stoppage of play.)

Extra seats were added at some point

The Red Wings had a lot on the line in this game, as they were battling for a wild card playoff spot despite having their best 2 players injured. The Habs got the lead early with two goals by Tomas Plekanec, and it seemed like it would be an easy one for the Canadiens, but starting in the second period, the locals found their second wind and mounted a comeback. It turned out to be a back and forth affair for the rest of the game, with the Habs holding out for a 5-4 win over the Red Wings. The crowd was a little dead for the first half of the game (with chants of Go Habs Go threatening to drown out the Let’s Go Red Wings), but the crowd woke up when its favourites did, and boy were they loud, especially when they tied the game. But overall the visitors were in control for most of the game, which didn’t give the crowd much cause for celebration (For sure coach Mike Babcock wasn’t happy with his team’s effort, as evidenced in his post-game comments).

It was a fun game with lots of goals, and in the end, the Habs are still undefeated when we travel to watch them play. Maybe they should bring us along as good luck charms? 😉 Ace defenseman P.K. Subban ran hot and cold, with assists on both Plekanec goals, but with defensive errors that ended in 3 Detroit goals.This game also marked the first time in 24 (!) years that Montreal has visited Detroit twice in the same season. This is now made possible by having the Wings in the Eastern Conference. And this was their first win at the Joe Louis Arena since November 26, 2008! The game’s boxscore can be read here.

The day after, we had planned to visit the city’s museums. After a short trip on the People Mover, we exited near Comerica Park, hoping to find a cab. Instead, we found a near deserted neighborhood, with no cops or cabs in sight. We were clearly sticking out, and after having a car drive by us while its occupants shouted derogatory slurs at my wife, we hightailed out of there, and went back to the hotel. Sorry Detroit, but we didn’t feel safe at all. It’s sad to see such a proud beacon of American business fall so low. They’ll have to make some difficult choices to get the city back on track, like ejecting tenants from slums and razing some neighborhoods to concentrate on a smaller urban footprint. In recent years, construction of new baseball and football stadiums failed to re-ignite the economy, and now funding has been approved for a new arena to replace Joe Louis. It’s hard to think this is the best use of taxpayer money. And honestly, the NHL will be poorer without it. Joe Louis Arena is one of the last legendary non-corporate arenas. 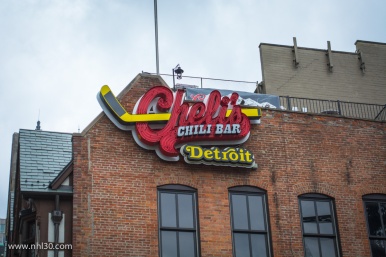 Home of the Detroit Tigers 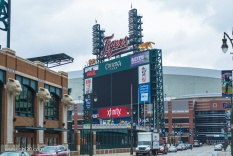 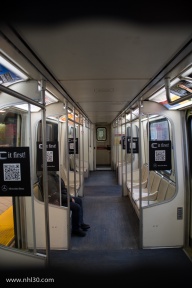 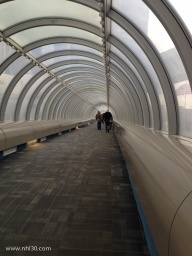 Lots of these tunnels make going from building to building easier.

The Renaissance Center is in stark contrast to the rest of Detroit. 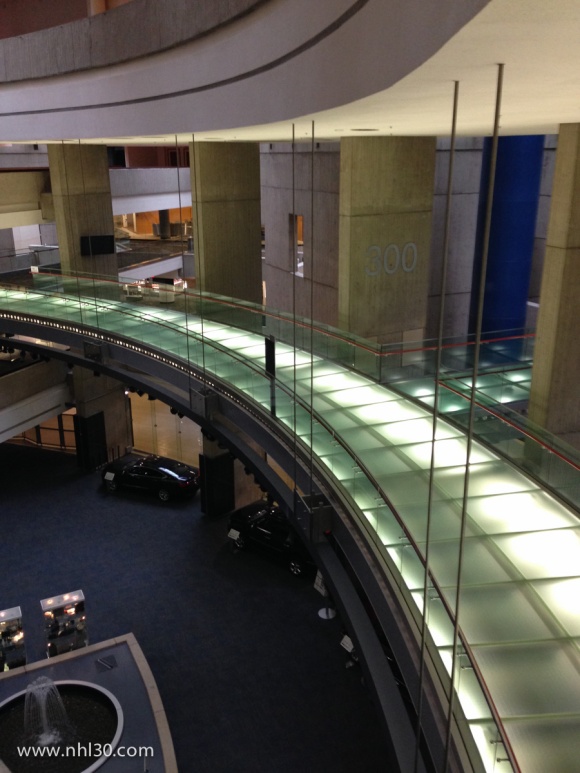 Additional Reading (from musicaddict.ca, my other blog): A City Viewed Through Music: Detroit, MI