I didn’t realize it at the time I booked this trip, but this game happened on the 50th anniversary of John F. Kennedy’s assassination, an event that shaped the American people for decades to come. (and 10 days later the Capitol turned 150 years old!) Washington bears witness to a long and eventful history, and we used the opportunity to play tourist for a couple of days and see the various monuments and museum that are legion around the National Mall. We flew in from Montreal the day before the game so we had the entire game day available, as well as most of the day after. We would try to cram in as much sightseeing as possible.

The Lincoln Memorial is stunning. Great tribute to a man who shaped his nation.

General Ulysses S. Grant. He led the Union’s army in the Civil War, defeating the Confederate forces led by Robert. E. Lee, and went on to become the 18th President of the United States.

James A. Garfield, one of four american presidents to be assassinated.

The Verizon Center is on the very edge of Chinatown.

Major restoration efforts are almost completed at the Washington Monument. It was damaged in an earthquake in 2011.

Looking out from the Lincoln Memorial. 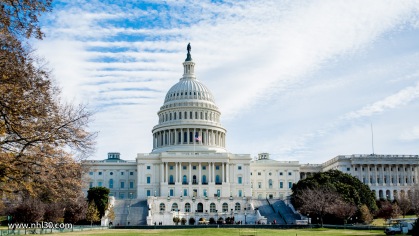 The Capitol. Pictures don’t do justice to how impressive it is, overlooking the National Mall. 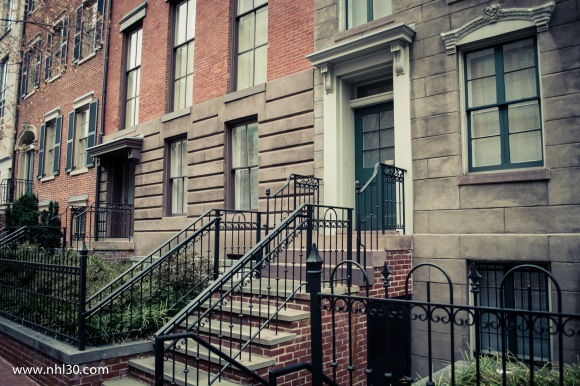 Central to Washington is the Mall, that 2 mile strip that goes from the Capitol to the Lincoln Memorial. Along the way you’ll find the Washington Monument, the White House, the World War 2 Memorial and the multiple branches of the Smithsonian Institution. The Smithsonian acts as curator for the nation’s treasures, and holds so many historic artifact that it is hard not to be emotionally touched by the things on display. We didn’t have time to visit each one in depth (or simply visit each one), but because museums are free in Washington, we were able to cherry pick the most impressive artifacts on display. One of the highlights of the museums we visited was the Star Spangled Banner flag that flew over Fort Henry during the War of 1812 (no photography was allowed because of its fragile condition) and inspired Francis Scott Key to write the words to what became the American National Anthem (naming the flag in the process).

By the “dawn’s early light” of September 14, 1814, Francis Scott Key, who was aboard a ship several miles distant, could just make out an American flag waving above Fort McHenry. British ships were withdrawing from Baltimore, and Key realized that the United States had survived the battle and stopped the enemy advance. Moved by the sight, he wrote a song celebrating “that star-spangled banner” as a symbol of America’s triumph and endurance. (Natural Museum of American History website)

Other highlights were notebooks from Thomas Edison, one of George Washington’s tunics that he wore on many portraits, a T-Rex skeleton (at the Museum of Natural History),  with the National Museum of Air & Space displaying the command module from Apollo 11, Charles Lindbergh‘s plane The Spirit of St-Louis and the Wright brothers’ plane. A brief detour through the National Gallery allowed us to quickly contemplate the works of Rodin, Rembrandt, Monet, Gauguin, Delacroix, Raphael and many more of the Masters. 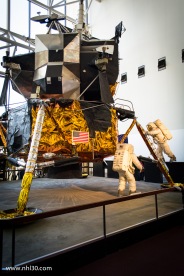 Actual (unused) lunar landing module. It looks like someone put it together int heir garage with scrap metal and tin foil!

Charles Lindbergh’s Spirit of St-Louis. Lindbergh was the first man to fly solo from New-York to Paris. In that little plane.

T-Rex, king of the dinosaurs. 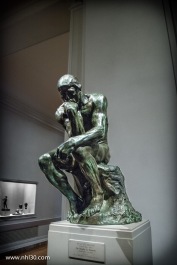 In addition to the museum, downtown Washington also offers a multitude of monuments and grandiose architecture (most of them hosting government bodies). We walked around the downtown area and also happened to come across Ford’s Theater, where Abraham Lincoln was assassinated by John Wilkes Booth in 1865. The theater has been restored recently and can be visited, but unfortunately we did not have time. One more reason to come back?

Overall, I have to say that Washington offers some pretty impressive sights, both for their aesthetic and historical values. But one of its most famous site, was also the most disappointing. The White House is such a recognizable and significant building that I couldn’t help being let down when it turns out you can only see it from a quarter mile away, through a fence with multiple trees obscuring the wings. On the other hand, as the official residence of the President, it’s easy to understand why it’s on such tight lockdown. 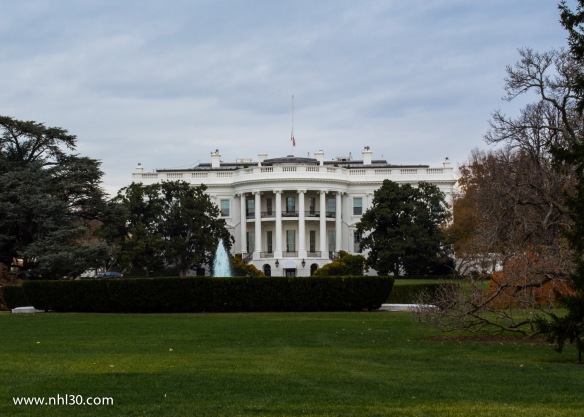 The White House. This photo is heavily zoomed in because you can’t get inside of a quarter mile.

After a full day of sightseeing, we made our way to the Verizon Center. As is usual in every NHL city, a fair number of fans in Canadiens jerseys were in attendance. We lined up for security checks (including metal detectors! I’d never seen that at a hockey game) where the attendant was playfully teased by fans about giving me a more severe search because of my team allegiance. We then had to wait for the gates to be opened. We stood behind a guy wearing a #33 Patrick Roy Habs jersey who started a conversation with us. Turns out he was a former Montrealer who moved to the US 20 years ago but never switched team! He was soon joined by his 2 teenage kids, wearing the Washington colors for which he jokingly apologized. When I mentioned that so far everyone had been very nice to me despite my wearing a Canadiens jersey, one of the kids said “it’s Montreal, you have to respect that tradition and what it means for hockey.” Yeah, well, tell that to people in Boston, Toronto or Philadelphia!! 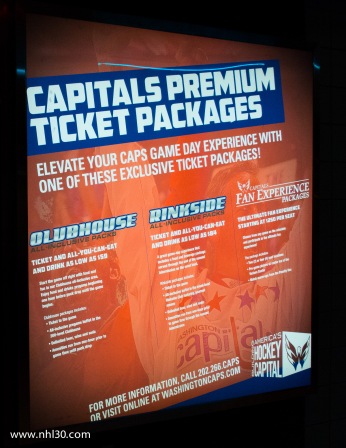 The other tenants at Verizon Center

Silent Auction, featuring some Habs memorabilia (Montreal has those too but I don’t think they feature items from the visiting team)

A quick detour by the team store netted a small plush Slapshot (the team’s mascot) and an Alex Ovechkin puck in lieu of my usual shot glass, which sadly they were not selling. I was pretty disappointed, and even more so when I peeled of the hologram sticker from the back of the puck, and part of the printing came with it. Hey NHL, please refrain from attaching item destroying stickers! 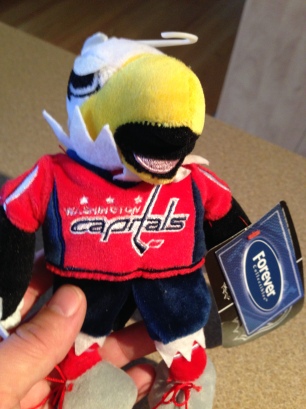 We had great seats at the visitors end of the rink. The Verizon Center (formerly known as the MCI Center) is a nice, no frill arena that is also used by the Wizards of the NBA and the Mystics of the WNBA. Its association with telecom companies as earned it the nickname The Phonebooth (ironically this is also sometimes used for Montreal’s Bell Centre, Bell being the major telecom provider in Canada). It opened in 1997, providing a downtown home for the team that previously played in suburban Landover. The opening of the Verizon Center is seen as a driving force for the revitalization of downtown DC. The 7 PM start time meant that a lot of seats were empty as the puck dropped, and the early 3-0 lead the Canadiens took kept the crowd on the quiet side. I was ready to write off the Washington crowd as dull, but as the place filled up, and most importantly as the Caps overcame their slow start and started a comeback, the crowd came alive and got behind their team in a major way. One awesome thing they did was every time the announcer called a visitor’s goal, the crowd would shout with perfect practiced timing “Who cares!” They were also the best at getting a good “Ref sucks” chant going. Unfortunately for them, they had plenty of opportunities to use that one as some close calls and some frankly blown ones went against the hometown team.

Lots of banners, but no cups. The Caps seem to be underachieving year after year unfortunately. 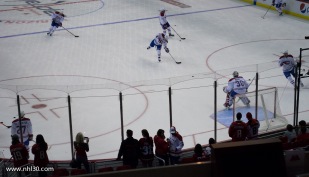 Fans are invited to “Rock the Red”

Nice work on the anthems Bob!

Ovi applying some pressure on the Canadiens defence. What a player!

Final score would be 3-2 Montreal.

My seating neighbours were a trio of guys originally from Burlington, Vermont, a city really close to the Canadian border. As such, they were former Habs fans who had converted to the Caps when they moved to Washington. They proved to be ideal game companions, with friendly ribbing throughout and a genuine appreciation for the game, regardless of team affiliation. I must say that the Washington fans were all really nice people. For sure, when the Caps started their comeback, I felt the rivalry, but always tinted by a genuine love of the game. So far, Washington is my favourite place away from home to catch a game.

Fans answered in huge numbers the call to “Rock the Red” by wearing the team colours. Captain Alex Ovechkin was a favourite amongst fan jerseys, along with Niklas Backstrom and John Carlson. Apart from the one sided first half of the first period, the game was a hotly contested affair, with Ovechkin scoring both Caps goals (the first one being an amazing display of shooting accuracy). In the end, the Canadiens were able to hold on to their lead and went on to win the game 3-2. (The Habs are still undefeated when we travel to see them play)

It was fun to compare the local traditions around the game, compared to Montreal. The classic organ ditties were played, team mascot Slapshot came out before the game to excite the crowd (I think he fired t-shirts into the crowd, but I might be remembering wrong), people’s SMS shout outs were displayed on the screen (somehow my shout out to the red, white and blue must have been lost in transit because it never appeared) and people were asked to vote for one of three songs to be played during the intermission (can you guess the link between Living Colour’s Cult of Personality, The Rolling Stones’s Sympathy For the Devil and Guns ‘n Roses’ Civil War?)

One difference I noticed is that they don’t have as many sellers going from section to section. It took almost all of the first period before someone came by selling beer! Not wanting to deny my origins, I stereotypically went for a Molson Canadian, which cost me 10$ with the tip. Almost as expensive as in Montreal. But I had forgotten one thing: American beer is weaker than Canadian beer. After one gulp I turned to my wife and said “What have they done to the Molson Canadian?” It tasted like it was cut down with water! Gotta remember that for next trip 🙂

All things considered, this was a fantastic trip. The city was great (only negative is the number of homeless people that come out at night), the sights were amazing, food was superb (so many mexican restaurants downtown!), the people were nice, the arena was nice and the game was excellent. And the Habs won, of course.

You can view the game’s official boxscore.