In the course of starting this blog, I was of course focused on my road trips. But recently it dawned on me that if I truly wanted to cover all 30 NHL arenas, I needed to write about my home base, Montreal. And what better way to cover the Habs’s home turf than with a season opener against perennial enemies, the Toronto Maple Leafs. And as an added bonus, the NHL Faceoff event took place in Montreal this year.

It’s hard to describe what the Canadiens represent for the people of Montreal (the whole province in fact, and even the Maritimes). While the organization is a shadow of what it once was (it’s a lot harder to outrageously dominate a 30 team league than a 6 team league), it is the oldest NHL team (this game opened their 105th season) and has a rich history to draw upon, which it (too) frequently does.

As luck would have it, the NHL Faceoff event was happening right by where I work, so I got there right after 5PM. As I arrived, I caught the last notes of the first band to play, The Beaches from Toronto.The crowd was very light so I was able to walk around easily. Apart from the stage, there were ability contests, food and beer, giant screens (the game was broadcast there) and various kiosks from sponsors. I noticed a guy discreetly offering unauthorised caps, and when I saw what they were, I had to get one. After bargaining the guy down from 15$ to 10$, I left with this beauty on my head.

Another proof of the intense rivalry between Montreal & Toronto. The Leafs did get the last laugh on that day though.

I didn’t have time to stick around for the other two musical acts: local hip hop group Loco Locass would be next (their song Le But (The Goal) is the song that plays at the Bell Centre when the Habs score) and headliners Kings of Leon would follow for a 40 minute show. There wasn’t much to do at that time, and I wanted to catch the activities in front of the Bell Centre so I left to make my way towards the arena, but not before catching a few pics.

Nice banner with all 7 canadian teams 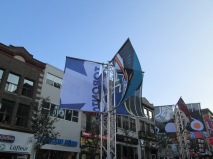 How a bout a cold one?

Pucky! (If that isn’t its name, someone wasn’T doing his or her job)

My trip to the Bell Centre was a funny social experiment. Decked in a Habs jersey but wearing the Leafs Suck cap, I got a lot of double takes. It’s obvious that people didn’t read the hat and just went by the colours. So I got a lot of “couldn’t figure out who to root for?” and quite a few “What the fuck is wrong with you?” One scalper started yelling at me that I was dishonouring the jersey, until I asked him to read the hat carefully. He gave me a high five and offered me a ticket to apologize! Since I was going with a friend, I turned him down. This experiment got me thinking that I could probably wear the hat (without the Habs jersey of course) in Toronto without much problem. I might even try it the next time I’m there. 😉

My friend and I hung out at the “blue” carpet where a bunch of local celebrities shook hands and took pictures. Some highlights were former NHL coach Jacques Demers, Hall of Famer Guy Lafleur and boxers Lucian Bute and Adonis Stevenson. 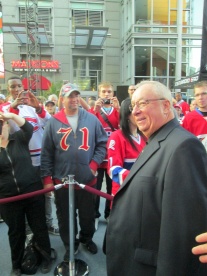 Youppi! was adopted by the Habs when the Expos were moved to Washington to become the Nationals 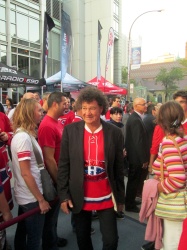 The atmosphere in the Bell Centre was, as usual, electric. Contrary to weekend games where a lot of Leafs fans come down from Toronto, not many people were rooting for the “enemy”. The Bell Centre crowd can be one of the loudest, craziest crowds in the NHL, but at the same time, it can turn on its team at the drop of a hat. A blown power play can be enough bring out the boos. The Montreal fans can be the most enthusiastic, and appreciate little things like good defensive plays or blocked shots, but can also be ruthless towards their players. A fitting example is goaltender Carey Price who starts each game cheered like a Hall of Famer, but gets booed by part of the crowd at each weak goal allowed. A lot of people are also quick to leave if the team isn’t giving its best effort.

The passing of the torch. (From sympatico.ca. My seats weren’t that good.)

The Canadiens organization is renowned for its pre-game ceremonies, but I felt that this year was a little weaker. Bringing back the passing of the torch theme from last year, Guy Lafleur handed over the torch to recently signed free agent Daniel Brière, who then passed it to another team mate, and so on until the last player (captain Brian Gionta) held it high for the Bell Centre faithful. The ceremony was very nice, and set the tone for the season, but it wasn’t as impressive as the past few years. For one, the theme was re-hashed from last year (and they had more legends bring down the torch from the rafters before passing it to the players), and it felt as just an after thought. The Canadiens use their glorious history a lot in everything that goes on around the team, but as the years pass (last Cup was 20 years ago), we’re reminded that they need to write new pages to that history. They can’t ride the coattails of Maurice Richard’s ghost indefinitely. And if you’re wondering why the torch imagery is so important for the Habs, it is because of this sign, that has graced the Canadiens’ locker room for decades. It is a reminder that this is a marquee organization in the NHL, and that its tradition and importance extends far beyond the rink.

The last touch to the opening was the national anthem. While I feel the anthems are ananachronistic part of professional hockey (with multi cultural teams hailing from around the world), they do feel integral to the fabric of a game. For this one, the house announcer told the crowd that THEY would be the singers that night. Accompanied by the house organist (yes, the Bell Centre has a real organist!), the sold out crowd of 21, 273 fans sang Oh Canada (in its bilingual form) with passion (and hatred for Toronto!).

The game itself turned out to be exciting and hard fought, and brought its share of unusual events. Newly acquired Habs enforcer George Parros got knocked out in a fight, not by a punch, but by falling accidentally face first to the ice (he was out a month with a concussion). A referee also got clipped and had to leave the game for a good ten minutes, leaving only one referee to police the game (like old times!). This was a rough game with a lot of fighting, but some very good hockey too. In the end, the Leafs came out with a stronger game and defeated the Habs 4-3, to the dismay of the fans. Every team loses its share of games during the year, but a Montreal loss at the hands of the Leafs, Bruins or Flyers always seems worse! And you have to admit that the Leafs have improved tremendously, and are ready to bounce back from their epic 10 minute meltdown in the last playoffs. The box score for the game can be seen here.

The Bell Centre itself is a great place to attend a game, and not just for the atmosphere. Walking around its halls is like walking around a museum (it also houses a team Hall of Fame museum), with team photos, statues and artefacts. Outside the Bell Centre there used to be the Centennial Place, with statues of past legends, but unfortunately it’s been torn down to make way for… condos. 😦 The place is always sold out, and there’s a huge waiting list for season tickets (I’ve been on it for 4 years and estimate my name will come up around 2030!)

The Bell Centre doesn’t have the mythical qualities of the old Forum, but it’s still a special place to see a game. I might have hometown bias, but I doubt many arenas will stack up to it in my trek around the NHL. 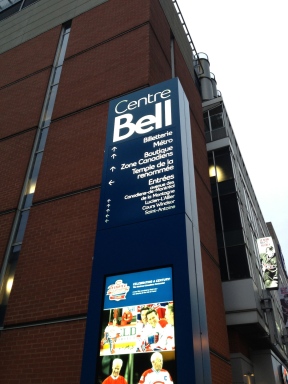 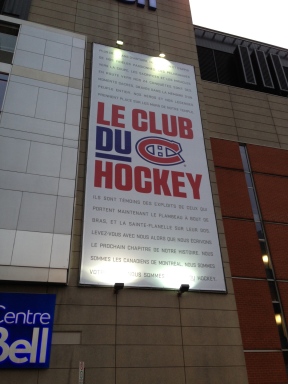 The street in front of the Bell Centre has been renamed after the team. 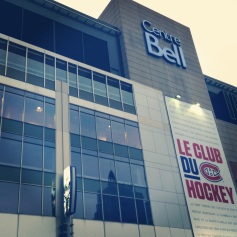 From right across the street 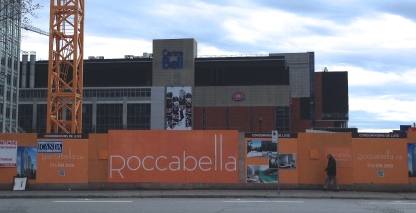 Once these condos go up, you won’t be able to get a clear shot of the front of the building 😦

The people who built the Habs legend. 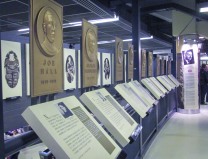 Each player has a small plaque detailing his exploits 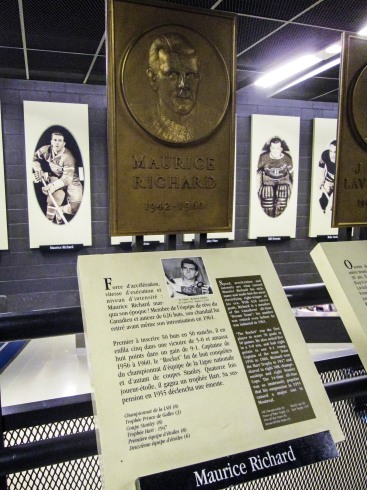 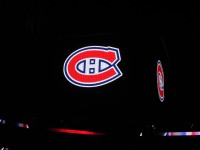 I don’t mind sitting in the nosebleeds. You get a better overall view of the entire game.