For the 2010-2011 season, I chose to go to Ottawa. Being the closest city to Montreal, this was an easy one to get out of the way. We chose the October 23rd game because it was a rare Saturday away game for the Habs. (Most Saturdays, the Habs play in Montreal. I guess it’s a benefit of being the oldest franchise in the league).

Our friends Martin and Stephanie joined us for the trip. When tickets went on sale, I managed to get sweet seats right on the center line. We were in the upper balcony, but that gave us a fantastic view of the action. 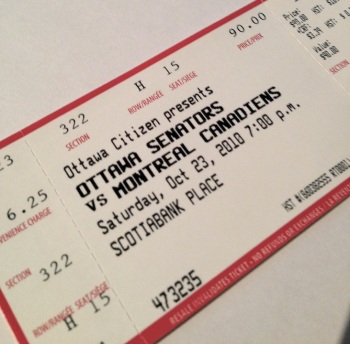 We made the uneventful trip by car. Much has been said about the Scotiabank Place being out of the way from Ottawa (it’s actually in neighbouring Kanata), and it’s not an exaggeration! You have to drive through the entire city to finally get to the arena. It’s a nice recent arena, but they’ve done a poor job of making it easily accessible by road (getting out of there is a nightmare) which is strange considering they built it in the middle of nowhere and could have planned for a steady flow of vehicles (forget taking the bus!)

As we walked into the arena, it became clear that the vibe would be different than the game in Boston the previous year. Most people wore Habs jerseys! You see, before Ottawa received a franchise (reviving the Senators name from a former team that folded in 1937), most people rooted for the Canadiens, from nearby Montreal, or for the Toronto Maple Leafs. When Ottawa got a team, some people never switched allegiance, and some switched… except when facing their old love. On a Saturday night, a short drive away from Montreal to boot, this meant that the house was pro Habs. How much? The Senators got booed in their own building! The MC tried to turn things around, to no avail, and he left trying to suppress a chuckle. All night long it felt like a Montreal home game. Poor Senator players!

One cool thing they do in Ottawa is have the flag body surf over the crowd during the anthems.  It looks really cool. The bad drunken singing? Not so much.

The game ended up a 3-0 win for the Habs (see the boxscore here) so the few brave fans of the host team left before the end, leaving the hostile crowd to chant the familiar soccer chant that was adopted by the Montreal fans “Ole ole ole”.

Not the prettiest hockey game, but I was now 2 for 2 on my road trips. Where to next?

Coming in at night. 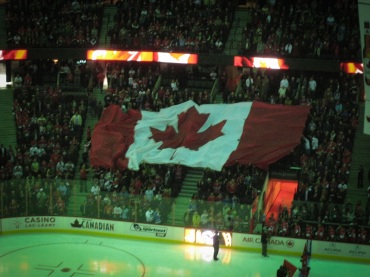 Franchise exploits. Notice the banners in the back that represent the original Senators. 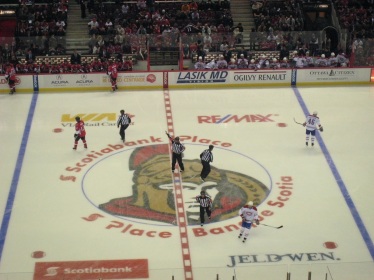 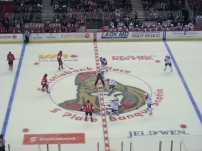 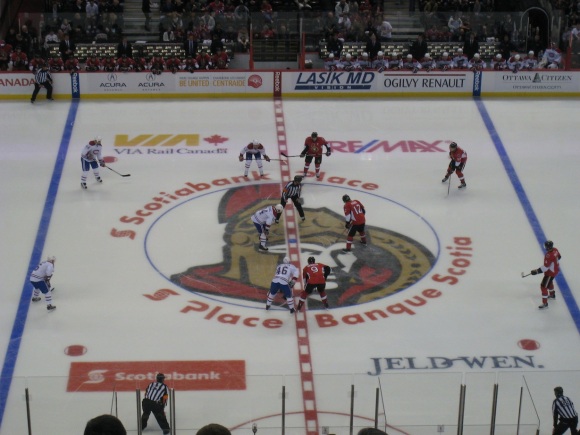